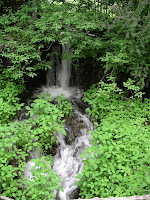 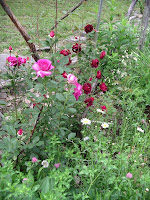 Not enough coffee and too much rain.
Went to bed full of friendships and woke up to more friends.
Friends at the table and walking across the lawn. Friends coming and going. Old friends and new.
Changing groups of many.
Finally just the druids gathered for the sun which for so many days- seemingly weeks -had not shined.
Bryan, in his top hat and camouflage short coveralls, ranted about the horse and the sun and moving on and the faith in the return of the sun each day.
We put away snacks and gathered our flowers and offerings and processed behind Bryan now in full druid robes white over white through the wet grass through the woods past the red eft and the soft green moss and the giant ferns into the Nematon with a path weed whacked clear.
Focusing and centering, sitting down on the earth is always good, breathing.
The sun rises over there and sets there passing through the south and the north on the way.
Our center our well, that deep bottomless frog pit. Damp grasses and thoughtfulness.
The warmth of the sun. Fire and flowers.
Coming thru the weeds and off time, then clearing and letting go.
Shattering the horse, ten years later, releasing old wishes and joy.
Letting in new vision.
Like the hawk spiraling near the sun, glinting in the light, smiling in the centered quiet, grounded on the earth.
Omens for the season
From the Ancestors: Ingwaz- the growing seed
From the Spirits of Nature and Place: Naudhiz- Need
From the Gods and Godesses: Odul- Sacred Enclosure
For the Season: Perth- luck, the chance cup
Food and friends and more friends gathering on the longest day long into the night. 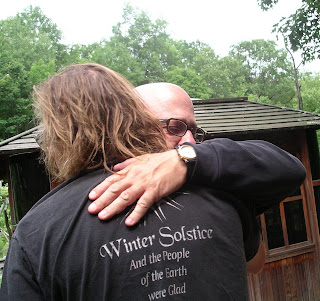 Posted by Our Whole Grove at 1:42 PM No comments: