Sunday January 31st , 2010 – Gathering for Brunch & Ritual
In honor of the GODDESS BRIDGET

11am
greeting & gathering & pre-ritual briefing & first brunch & toasting
NOON
Ritual preparation (get ready for ritual, layer up, do what you’ve got to do)

Sacred space & time
Offerings to the Earth Mother
A Guided Meditation
Directions
Center
Offerings to Manannan/fire–well-tree/Opening of the Gates
Offering to outsiders
Offering for insider Bridget
Sacrifice for our Kindred Spirits
Our Honored dead
Our spirit Allies
Our Gods & Goddesses
Special Praise offerings for Bridget as the Herald of the Coming Spring-Bring on the Beat
Prayer of sacrifice
Seeking and reading omens
Hallowing and sharing of The Waters
Special Magicwerking –Blessing of our Tools and Passing through Bridget’s Belt
Oh Yay Bridget! Thanks
Thank you Gods! Thanks Spirits! Thank you Honored Dead!
Give Thanks again Bridget
Thanks Manannan/Close the Gates
Thank you Earth Mother
Invite and Welcome Bridget into the hearth & home
The ritual is over and 2nd Brunch begins!
Posted by Our Whole Grove at 7:19 PM No comments: 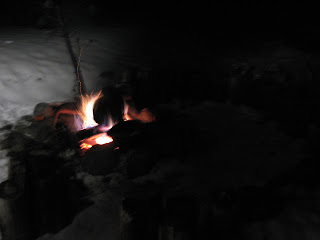 The day before we prepared for the blizzard that wasn’t- hauling wood, sticks, clearing the deck- battening down the hatches.
Figuring that maybe the only way we’d have the fire pit in the morning was if we started the fire before the snow came, Bryan gathered dry wood and set to burn through the packed ice. It looked like it might only be us- me, Bryan and Hudson- so formalities and cleaning were dropped for more wood gathering, cooking and dancing.
The late afternoon air was crisp and the quality of light was exquisite but the fire smoldered with little flame. Smoldering pine needles and pine cones. I went inside to get paper to burn and came out to the magic of the fire in full flame. The sun was beginning to go down, shining straight through the house. We waited for snow and worked at staying warm. 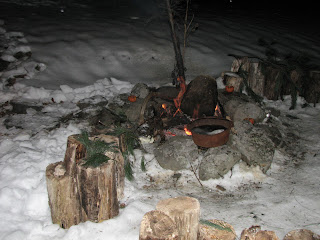 Feeding the fires. Cooking in the oven. Feeling family.
After dinner and before bed Bryan rolled a massive Yule log into the cache of hot embers. It caught and smoldered and the wind roared and kept the fire alive. All night I got up and saw the flames. Blown by the fiercest winds but not out of control, the giant Yule log burned steady. 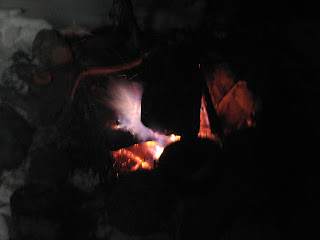 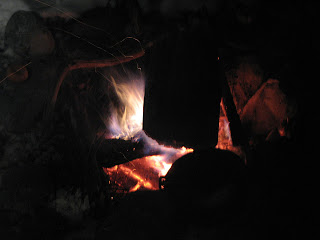 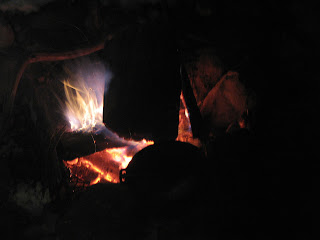 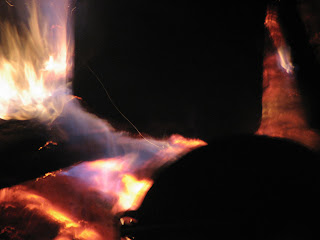 So the next day we had had only a dusting of snow and the fire was still there. The logs ringing the fire were crowned with white circles, 24 in the half ring, 4 more as gates and 4 more that bridge to the rocks that frame the fire. 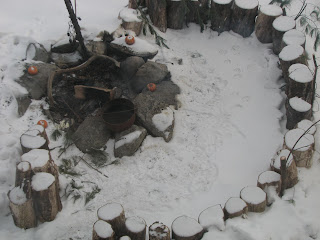 We gathered more wood and offerings and cleaned and rested. Though we didn’t start at exactly 3:33, we layered up and were outside by 4ish, the sun was still up and the sky was luminous, pinks, golds and whites. 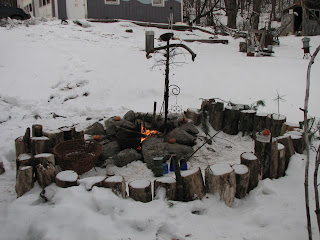 Everything was quiet. The deep quiet of snow, the quiet of just family, the quiet hiss of the fire burning for a whole day- the shortest day, longest night. Things I remember from ritual are circles and sounds. Pouring cider for the Earth Mother half way around the circle and then wine around the other half because she is not our mother for only half the year but always. Our good fire, our well, our very old Yule tree. Dear Mananan and Bridget, whose altars form the edges of a triangle with our fire, were welcomed with gratitude. Each praise accepted with a sizzle and flame burst, and each of us in turn asking for acceptance of our sacrifice. Bryan began to speak about the outsiders and to open our pickle jar offering when suddenly a bird, perhaps a wren, sang its song- loud and clear and long. We laughed; it was easy to feel the presence of our Kindred. 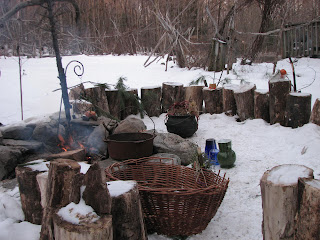 Wine and pine cones and our kitchen cauldron of dried flowers and grasses for consumable sacrifice.
The round orange halves of a tangerine full of seeds, full of juice, full of light. Cold juice for each of us and for the spirits as well, visions of summer shining.
Hudson placed on the fire his gingerbread house as thanks for and wishes for creating spiral flame.
The final seasonal sacrifice of a large basket- long used as detritus storage collecting dust by my bed, now used for renewal. Bryan placed the basket right side up on the fire, which was sort of precarious and sort of balancing. It seemed to momentarily smother the flames until, imperceptibly, the smoke caught to fire and then a vortex of flame roared to life. We all quickly stepped back behind the ring of logs and still the fire grew. We were howling and Hudson yelled that it was the awesomest thing ever and really it was. The flame was alive, rolling and circling and strong. It went on and on and grew and was bright for a long time.
I am still enveloped in the circle of that fire, may its strength keep us strong, warm and safe all winter.
Bryan brought out the runes and Hudson went forward to pick them-
From the Ancestors: Daguz- day or vantage point- like high noon and sometimes it is a paradox -like you see things from a much different vantage point, sometimes like seeing things from both sides
From the Spirits of Nature and Place: Othala or Odul- sacred enclosure or inheritance, kind of like what you protect and treasure and keep safe
From the Gods & Goddesses: Fehu- the fee what things cost- and fe fi fo fum and fa lalala
For the Season:Sowelu or the Sun.
Well done.
We draw these same runes in different combinations often- they seem sometimes like grove runes.
Silently, I had been hoping to draw an omen, though Hudson did a great job and I was satisfied with the blessings. But just as I had stepped one foot over the logs and halfway back into the circle Bryan asked if I would pull an Ogham, it was Gort -generally thought of as ivy, but translated it means a cultivated garden or a plowed field. Ivy is a grass that is suitable for the herd when the grasses fail, in the winter icy can still feed the livestock. Lovely. And then we hallowed and took in those icy waters, crisp, snowy and a bit sooty too. Drinking in crystals and light and spirit and flame, my eyes poured tears from smoke from the fire. It seems that at each ritual these days my eyes cry buckets and in that smoke and water I am taken away and transformed and brought back cleared. 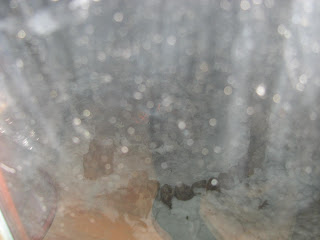 Joyful and refreshed we offered all our thanks. Then with darkness approaching, the snow blue and the first stars coming out we returned to our warm house for dinner. The fire burned well into the night. 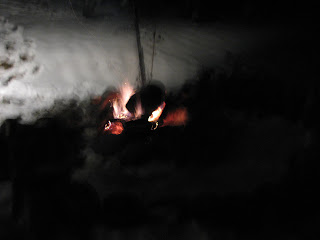 Posted by Our Whole Grove at 7:23 PM No comments: