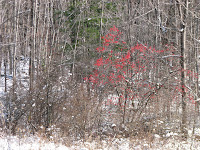 Sunday 12/20/09
3:33pm
bring pies, puddings, cookies -savory or sweet
fill the air with warmth and glad tidings
the light returns- welcome the Oak King!
my new favorite poem - please take to heart:
in these dark days of December
we are nearer to Spring
than we were in September
please RSVP to susan@urtharts.com
Posted by Our Whole Grove at 10:47 PM No comments: 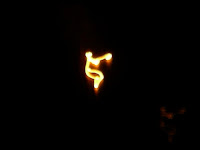 Day After: The sun shines brightly on the frost and the only sounds are the rush of the stream, the dropping of leaves from the forsythia – still green but now frost worn- and one or two birds. The silence is heavy like a blanket of snow and a harbinger of the total silence of deep snows and dark days. Everything is different today. 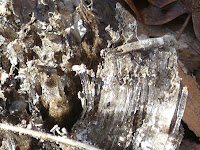 2 weeks after: The sun was out today- rising flaming red close to due south. The peach tree still holds her leaves and the willow is reluctantly turning yellow. The land was full of turkeys today – more than 2 dozen, perhaps attracted by Elizabeth’s acorns. A warm day is now in the 40’s° and morning frost is a given. There is still kale but the garden has been put to bed and it is dark by 5.

As always the Samhain season is wyrrd and long. We spent a week before Halloween putting out dumb suppers and lighting candles in carved pumpkins. Then there was the hoopla of Halloween proper with warm rain and hard gentle winds and leaves and zombies and candy and parties missed with time bending to the moon. 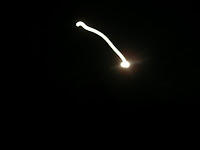 So by the time we got to our ritual preparations the leaves were mostly down from a week of strange winds and we were ready to put the season to bed. I had wanted a journey -thinking of Samhains past transforming as you passed thru the veil to the underworlds and out the other side. After the Johnny Appleseed journey of transformation and picking so many apples and the darkness and the need to move beyond it seemed natural. Hudson was a bit under the weather the Friday of our ritual and so he and Bryan stayed home making schedules easy and allowing Bryan to spend the day setting up places. We had talked about where and how we would walk about and knew we needed to be led by light. We had decided to start at the small house fire circle and process perhaps to Mananan, perhaps to Bridget and then to the 5 circle fire pit for ritual before closing again at the home fire. 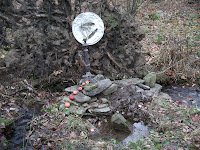 By the time I came home from work, worn but happy, the boy was resting and Bryan and I got to walk the path he laid out. From the home fire to the hollow tree, seasonal altar previously with a Belanos sun image now replaced with a purple candle. Then to the may pole hole, uncovered and filled with Uncle Magoo’s hurricane lamp with the red candle. Then to Mananan lit with 3 candles and then across the whole field past the garden to Bridget surrounded by votives and a hurricane candle glowing in front of her. The central fire was smoking and with a small breath came to life.

The land felt good and things seemed set though still in that time bending Samhain way. Not even thinking really of if we had offerings; I had seen Bryan come downstairs with his runes and magics and not really thought about much. I gathered the last of the flowers, a last rose, and some herbs. Everything green and damp. Not yet dark but no longer day. Elizabeth came with baskets of flowers and libations as always and filled the house with her spirit- like fire and water together. We snacked on the chicken soup to be dinner later and opened her cyser, creating warmth. We toasted each other and our Whole grove and the season and moved from the kitchen to the fire. Susan and Gwen came -more glasses and celebration. Then Judith arrived, the kitchen filled with food and people and we all toasted once more. Finally Bill and Nina came with even more food and we finished the cyser and began. Hudson needed to sleep and I carried his spirit with me thru ritual, always looking up to the bright house where he rested. 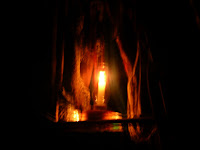 Bryan led with the flashing red light through the dark to the portals of fire glowing in the dark.
We journeyed through from the house fire pit -spirits and shooting star; to the altar for the season in the trunk of the hollow tree; to the red candle burning like a heart deep in the center of the field in the hole; to the Mananan altar with 3 lights like the circling legs; all the way across the land past the garden to Brigit, shrouded in dark lit by a stream of lights; and onto the 5-circle fire pit in our center.
We gathered and separated to regroup, find our offerings, get warm, get light and begin again. 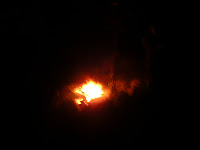 Coming together we found our way in the black dark to our spaces by the fire.
We were centering, trying to bring the fire to life, stepping all over each other, pushing back and making space. Bryan opened the gates and speaks to the outsiders. Our friend Anna and her son arrive- black figures through the smoke back lit by the motion activated light- like shadows appearing, strangely glowing – her smile beaming as they drew near the fire, the smoke of their breath mixing with that of our fire.
As always the glow and the smoke. All the offerings, had we gathered them- was it a dream- did we actually have anything to offer? The dried grasses fed already for warmth and brightness, but we had flowers, what I know now were the last of the flowers. Our dead, our dear dead, so many again this year. Long breath, a sigh, waiting for the New Year to begin. Spiraling into the smoke, almost hard to breathe, tears of smoke pouring out of my eyes; it was like passing into other realms. Bryan changes everything as he takes out a crystal ball for scrying and the world of that shimmered and came alive and disappeared and was huge and small at the same time. Getting lost in spheres and smoke and flames and prayers.
Our omens for the season-
For the ancestors: Ehwaz- the horse, how we travel -the partnership between horse and rider
From the Spirits: Jera or year or harvest or the cycle of a year
From the Gods & Goddesses: Daguz- day or vantage point
For the Season: Thurisaz- Thorn
We have gotten many of these omen before, we need to pay attention.
I look up at all the smiling faces lit by the fire now alive with our sacrifice. So much thanks. The house lit up brightly calls us into its warmth. 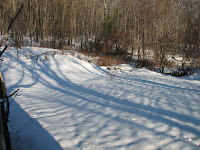 5 weeks after: The snow has been on the ground solid for more than a week. The frosts have gone and only the patches of land where water bubbles still have green. Winter is here and we won’t see the ground again really until spring. The days grow rapidly dark. The sun rises slowly, due south and bright red.
Posted by Our Whole Grove at 9:02 PM No comments: