The moon disappeared and came back just like the long days will return. Isaac’s widow Phaedra made the analogy that the light returns even if we do not see it. The days now grow imperceptibly longer, aggregating over these next weeks to real time.

Memory and recall. Bringing it back and moving it forward. It was an intense year and it was interesting that  as we came to our Winter Solstice  we hadn’t really yet resolved Samhain. And while Samhain is always a bit strange,  this Samhain, was particularly so, planned with very specific sacrifice and without a specific answer. There was no clear omen because of the way things worked out, the comings and goings and passing of time.  Our omens were sensed from the earth and felt deep within but putting them down concretely- our record of recollection, is still as elusive as our Samhain closing.

Scryed from the earth- there was a deep rumbling in the North representing a disturbance or challenge yet to come and with the reminder not to shrink from it. Our boundaries were tested and we were told to stay true. The bird singing in the West spoke of the afterlife, sounding so joyful and pure.  And we offered prayers to our dead friends, to our honored dead, asking for them to remain our allies.

But everything was vague or elusive and remained thus-  not because we didn’t know but because things were not the way we usually think or think about them. It was more like how we feel or sense, deep in the earth or in the ethers. Whether the milk weed flying to the directions, the soaring embers from the dried flowers, the spirits of the great grandfathers in a single leaf, or the warmth of the fire in the cold- it came to us and left and maybe took something in its passing. It was about the connections.

And coming out of that, even though it was a cool ritual and all that, we felt strange and unfinished. But there was a definite feeling. We knew it hadn’t been closed but it was so full that we settled.

So in dealing with issues just before Solstice and reaching out to others in the organization, other kin or kindred people as opposed to the Kindred Spirits, we were able to put a lid on all that and let it go, with good faith, like the moon or the sun.

Always not yet ready we begin. We are here to honor the gods, gods who give meaning to life. 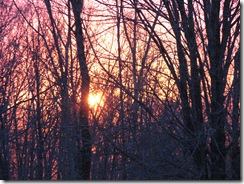 Washing our hands in the warm clear water, to purify and focus,we circle the fire in a triangle of 3, echoing the fire itself. Our family together honoring this cycle of the year.

Let this fire be a good fire.

We had all sorts of spirits as libations for the Kindred- bringing out the good stuff to ignite and inspire.

The last of the pumpkins from Samhain to the outsiders.

Letting go of, moving on from with gratitude, and moving toward with good vision, direction and more gratitude.

We are thankful to be here now, together and warm by this fire, with clear intent from our heart.

It is amazing how a small fire can burn so brightly and how its heat can surround us.

Cookies, and herbs, and oils, and liquor and prayers as sacrifice.

the brightness of the flame, allowing us to feed it, to sacrifice and give unto that we which need to let go of with gratitude. the brightness of the first star, in the East, with the promise of wishes and dreams come true. And there is always a bird calling, even in the early dark of midwinter solstice.

from the Ancestors: Othala or Odul meaning sacred enclosure – think about what we treasure and protect and hold dear

from the Spirits of Nature and Place: Laguz or lake or a well or drawing up energy- what do we draw from and channel through us to bring back out

from the Gods and Goddesses: Raido or communication- wha we put out into the world and the return back

for the Holiday: Gibor or giving-the reciprocity of the gift

then I pull Ogham:

Willow- which relates a lot to water and the moon and flexible change, intuition

Apple- which often has to do with choice and things of beauty and love, otherworldy apples

All rapid growers, all joyful and appropriate to the season. 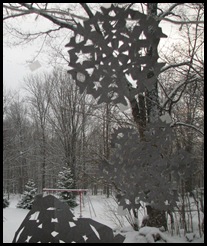 Drinking the cold waters in large wine glasses, as a gift from the Earth Mother, shared as family as the first star shone in the darkening sky.

We close with the fire burning to embers, offering the last of all our gifts with gratitude. Together we enter the warm house for dinner.

Posted by Our Whole Grove at 8:38 PM No comments:

lighting fires and tying up ends and baking. The once in several lifetime lunar eclipse the morning of the solstice. Bryan had a fire going all that night and we cleared our spirit, the family sleeping together so we could wake up together to see this portent of a new focus together.

We had been having the typical mercury retrograde communication weirdness with the phone going in and out for days, strange email exchanges, coughing and illness, strange work phenomena – all coupled with the hubbub of the holidays. Changes of the season afoot.

Bryan made a small Yule eve fire outside in the close to the house fire circle to welcome the eclipse. The moon, which had for nights disrupted our sleep bathing the partially snow covered land in bright light, was to be consumed by our shadow.  We woke just as it was beginning to disappear, with the boy seeing it and going back to sleep and Bryan outside and me meditating with the eclipse through the window. The first words that came to me with the eclipse were “gratitude” and “wholeness” and then also “service”, “support”, and “community”. The phone oddly rang and it was grove friend Bill from CA calling to welcome the eclipse with us. I went outside barefoot in the snow to give Bryan the phone and the phrase and action of “stretch” came. 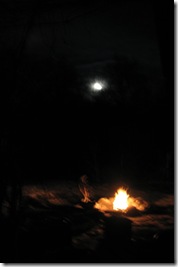 The moon faded and became darkened and the fire outside glowed and our woodstove burned throughout the night.

Morning rose and we were filled with the magic of the night.

We prepped for us and our Kindred and gathered our offerings of sage and cookies and fine spirits. We had much to let go of and to be grateful for.

Posted by Our Whole Grove at 9:02 AM No comments: