After the rain the sun shines 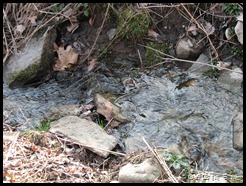 The weather has been endless making time eternal. I could not live in a single climate, especially with endless blue skies. I need the clouds and moisture to talk to me.

Vernal Equinox rant just before Beltane; the lost time of the blooming, of eternal youth that exists not in the real world of today. All the trees have flowered now, even up here. I had to water for days and we finally have had days of blessed rain, but now we know that the fruit should grow and the trees won’t die.

The seasons have shifted slightly this year from the calendar through nature but the slowness that came after ritual let our daffodils and forsythia bloom from then until now – a whole season. Thank you.

Turkey Buzzards in a figure 8. Guests come early and our extra Monday child was here too. Moved outside for space. 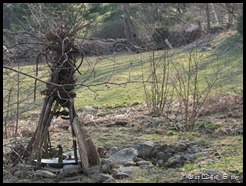 Walking to the deep quiet of the Nematon bringing stuff in preparation I sensed that maybe so many people cursed the waters after the hurricane that we got no snow and no rain. Even the moss was dry. I wanted to pour water on the ground as we walked in gratitude and prayer.

We had spent days trying to visualize ritual to set up what we would do, with no real plan defined. The extremely warm weather threw us off, with all the trees in a rush to bloom- cherries and magnolias in mid-March? Was it summer? Was there any balance? 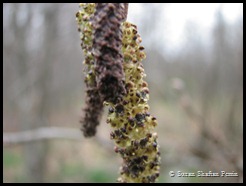 Taking more stuff to the Nematon, boys in slippers and socks follow. Our friend asks about ritual whats and whys. For my son, ritual is something we do, sometimes something we '”have to do”, but certainly something he intimately knows- like it or not it is part of him. I think sometimes there is a purposeful  ignorance, about a holiday or god (though it could just be a boy thing), but when your friend is interested the light bulb lights. So we talked about ritual as we walked through the woods and looked at the lack of water.

Pre-rit talk and boy readjust- the energies of our children do not always mesh with our focus. Always a balance dance and especially at equinoxes. Bill and Nina arrive and we have Katrina & ZJ & us & the boys. A nice group that dissolves and regroups and prepares and gathers as the storm clouds gather.

We carry lots and the sky gets dark. The gong and a lightning flash to begin, we are here to honor the Gods, Gods who give meaning to life. 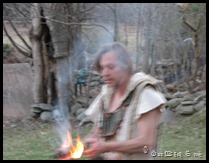 Bryan lights the smudge, created from our own sweet grass and cedar. Several times it smokes and then flares. We start. 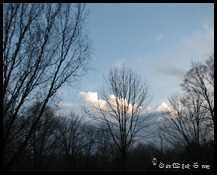 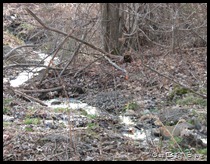 Processing silently, groups of friends through the woods. Sprinkling water with each step, stopping at the bowl for lustration, one always wants to dance or giggle going over the moss in the woods. We enter from the East  and find our space. We get into the center. Everything felt now and just right.

We love the Nemeton and especially in the Spring. Usually it is very damp and frogs are alive and join us. Often the well is very deep and resounding and full of its own sounds, sometimes amphibian.  Even with the limited runoff the stream was a constant motion of sound surrounding us and harmonizing with the words and other voices. 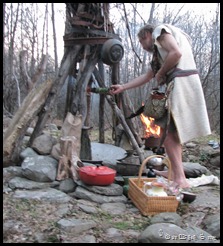 There was a magic in the cauldron of Fire just burning, burning until the end. It seems like it burned far longer than there was fuel. A hovering flame glowing throughout ritual. The sweet smell of the smudge in the top of the center was constant like the stream. 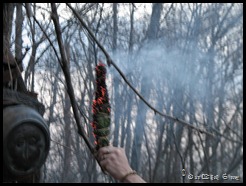 Our Well here is a silver colored sphere with a center hole to the deep below. Liquid generally gurgles through, but that night all of our sacrifices resounded as each spiraled down. I love how in the Nematon, sacrifice disappears through the well, through the water, through the earth. We hear it after we no longer see it. Gone and yet still here.

This Tree- what goes up and like our spine. 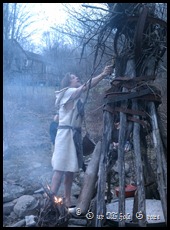 There were 2 separate planes flying at flat angles to each other as Bryan offered sacrifice. And then a 3rd due east-west. Planes don’t often go overhead here and this was like the birds that always punctuate our rituals.

Thankful for fruition, for flowers, for fruit, for vegetables. 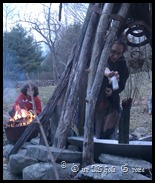 The Earth Mother is not just this planet. This balance is both within and without. Feel ourselves on this Earth.
Rumbling thunder. Rumbling Stream. Gathering Clouds. 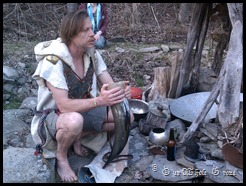 Our Omens: From the Ancestors: Hagal or Hail- the hail stone is also thought of as the seed matrix, it is an element that pelts and destroys but it has a new life force, it is seminal, it suggests that when it comes down there is a disruption but with this change there is a new beginning. From the Spirits of Nature & Place: Wunjo or Joy- the joy and the camaraderie, the company and feeling of being entertained and comforted by family and friends and various spirits. From the Gods & Goddesses: Laguz or Lake – our connection with the Gods though our feet, drawing up that energy, bringing up something from down below, this whole vertical access Kundalini thing like the spine. For the Season: Elwaz or the Yew-  the death spindle or crook, the spindle with its relationship with weaving and the loom, the web of wyrrd, computers and the internet-tools as gifts.

Hallowing the waters the sickle was stuck in the bag, but the blade was poking out and Bryan used that like that. Using our tools as they are given to us.

Drink the water slowly. The glasses chime like bells. 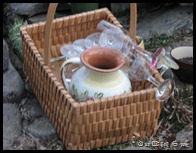 Giving our thanks with all that’s left as the clouds swell dark & large. Gentle rain just as everyone and thing gets inside. Lots of gluten and non-gluten carbs to eat and fizzy stuff to drink.

At the end of our feasting magically the fire we thought was long out flared in the hard rain. 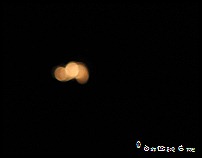 The morning after, true equinox, we were up with the dawn. The sun rises exactly through the entrance to the Nemeton on the Equinoxes. A perfect balance. 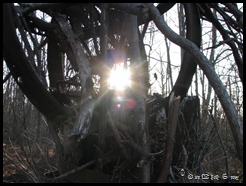 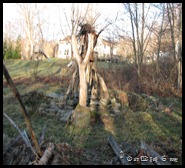 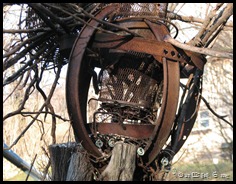 A dry Spring- the Earth grows hard and dusty. This is a gentle prayer for rain, for appropriate waters, for life to grow and flow in balance 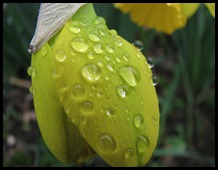 though we had a wonderful vernal equinox ritual with thunder and dark clouds rumbling, it has hardly rained since and with no snow this Winter the Earth is terribly dry. Red flag warnings abound and fires can be fatal as winds blow fierce. It is as if, after the hurricanes, people cursed the over-abundance of water and now we have not enough.

At least the Spring has slowed. With the early hot weather, everything bloomed down the mountain only to be killed by heavy frost and light snow. Up here only our forsythia had flowered and has stayed in flower for more than a month as have the daffodils. I kind of prefer this extended springing, but it is challenging not to have mud season. 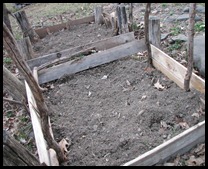 Posted by Our Whole Grove at 7:53 PM No comments: